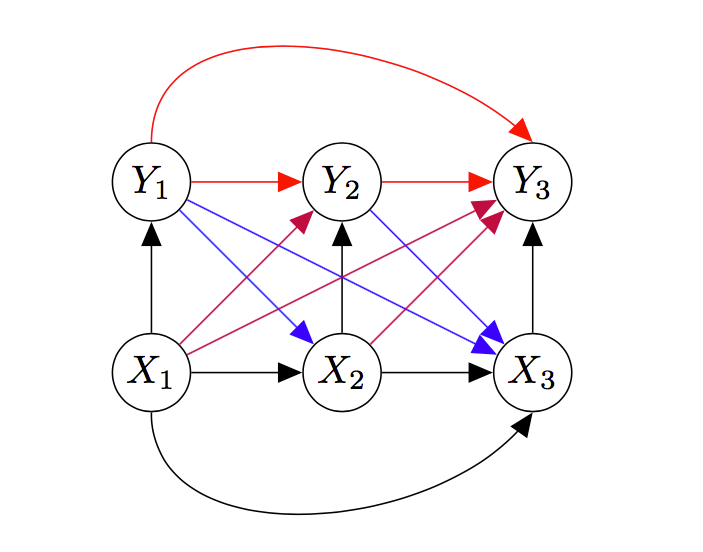 This post presents a defintion of the discrete channel in terms of a graphical model, which visualizes the conditional independence structure of the code and signal sequences as a graph.

The utility of this approach is that it makes working with joint probability distributions with non-trivial conditional independence structure visual and intuitive without sacrificing rigor.

Furthermore, it allows connections to be easily made to other kinds of statistical inference problems. For example, there was a fifty year gap between Shannon’s famous theorem establishing the limit of communication efficiency and the advent of codes that could achieve that limit. These codes were formulated using graphical models.

All of the ideas above are explained, hopefully as clearly as possible, below, with only the assumption of familiarity with some fundamentals of probability. See this blog post for those fundamentals.

It might be helpful to have a passing familiarity with the fundamentals of information theory as well. See this blog post for an introduction.

The concept of a channel is central to information theory, the branch of mathematics that deals with problems of description and communication.

When we communicate a message over a channel, we input values of \(X\), the entity we are communicating with observes values of \(Y\), and we want to ensure that this receiving entity is able to reconstruct the original message with as little error as possible.

From the perspective of an information theorist, the physical details of the channel are unimportant. All that matters is what kind of transformation it performs. To describe a deterministic transformation, we need to specify what the output will be for each input. Since the output of a random transformation on a given input is a random variable, not a fixed output, this won’t work for stochastic channels.

The channel most commonly considered for digital communication is the discrete, memoryless channel without feedback. These are statements about the conditional and joint probability distributions of the inputs and outputs of the channel, but they are more easily understood as statements about how the channel operates.

A channel is memoryless if the input in the present doesn’t affect the output in the future. Since the current output is determined by the current input, this also means that past outputs have no direct effect on future outputs.

A channel has no feedback if the past outputs are not used to determine future inputs.

For example, the information above is used to prove that the conditional distribution over outputs \(y^n\) for inputs \(x^n\) of length \(n\) can be written

The proof of this usually proceeds through multiple lines of algebra involving manipulations of conditional and joint probability distributions which feel almost totally unmoored from the simple, intuitive descriptions above.

Intuition can be rescued, however, by introducing graphical modeling, a visual formalism for working with joint distributions with interesting conditional probability structure.

For more on dependence, see this blog post, which also develops some core concepts of information theory.

which looks just like our definition of independence above, but with all of the distributions conditioned on age. This is called conditional independence, and if two variables are conditionally independent, we can say that they don’t directly depend on each other.

To build a graphical model of a joint distribution, we first draw nodes for each of the variables, then we draw edges between a variable \(X\) and a variable \(Y\) if there is a direct dependence between them. 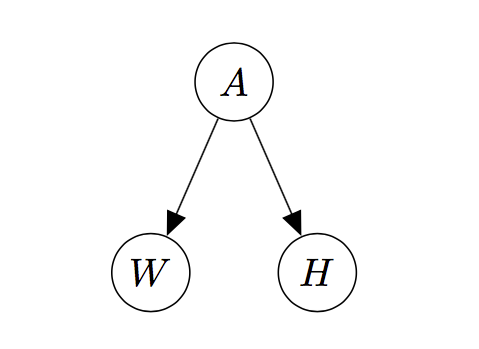 This is sometimes called the “hidden cause graph”, since it indicates that two variables (on the bottom) which are correlated, and which one might be tempted to say have a causal relationship, are in fact caused by some other variable.

Graphical models are useful for keeping track of dependencies in very large distributions. Numerous algorithms for statistical inference, including expectation maximization, belief propagation, certain variational methods, and more, are easily understood in terms of graphical models and algorithms on the underlying graphs.

There is much more to learn with graphical models. For a thorough introduction to this subject, check out this monograph by Martin Wainwright and Michael I. Jordan. However, what we have so far is enough to at least set up channel communcation in graphical form.

For simplicity’s sake, let’s consider a channel that takes in three inputs \(X_1\), \(X_2\), \(X_3\) and spits out three outputs, \(Y_1\), \(Y_2\), \(Y_3\). For now, we make no assumptions about the channel except that it is discrete in time. The graph describing the joint probability distribution of inputs and outputs has lots of edges: 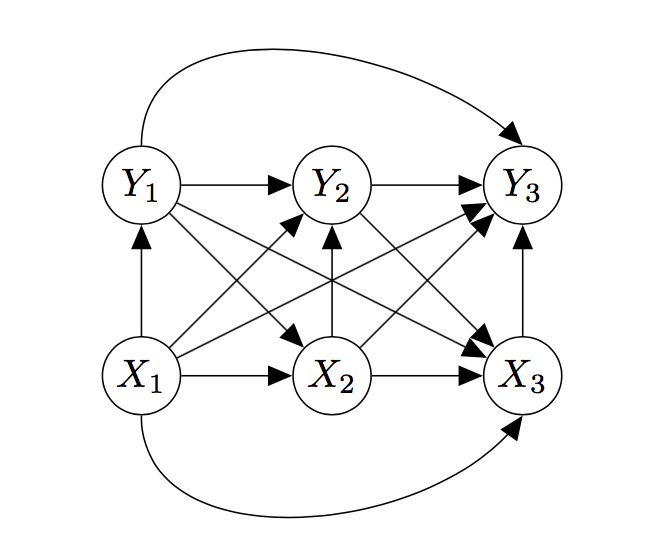 In fact, every node is connected to every other node. This means that none of the variables are conditionally independent of any of the others.

Now, we’ll start making assumptions about the channel. Before doing so, I want to color code the edges, so the following is easier to understand.

Therefore, for a channel with no memory of past inputs, we can erase those edges, as below. 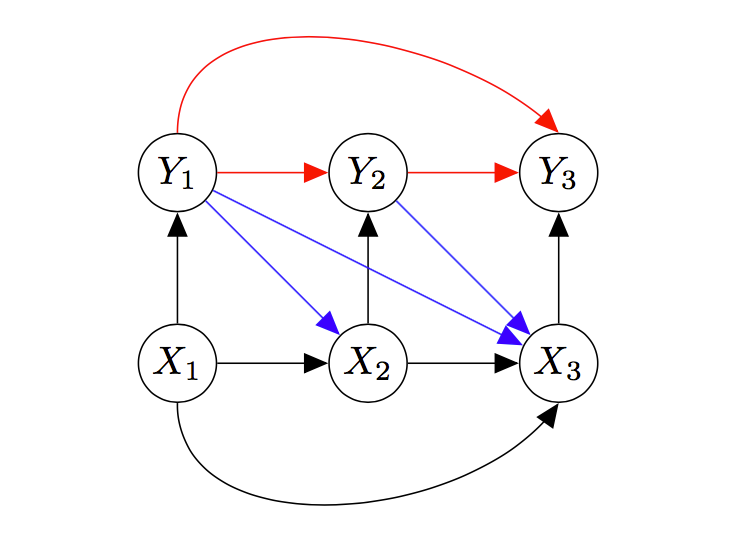 Therefore, for a memoryless channel, a channel that has no memory effects on its inputs or outputs, we can erase the red edges, which connect \(Y\) values to each other. 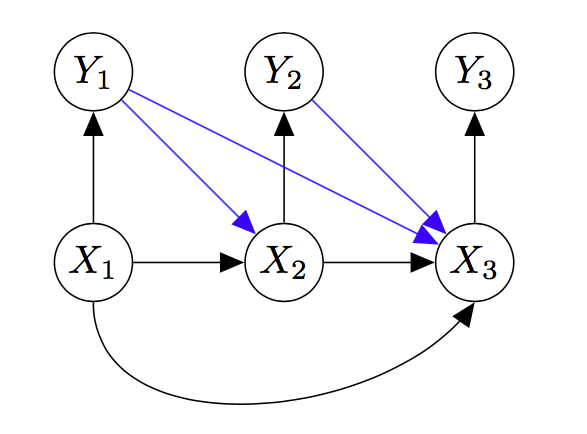 Lastly, channels frequently operate without feedback, which is to say that the actual past values of \(Y\) have no bearing on the future values of \(X\). A television studio doesn’t watch the output on your screen and then adjust the broadcast to compensate for errors.

In this case, we can remove the blue edges, which represent direct dependencies of future values of \(X\) on past values of \(Y\). 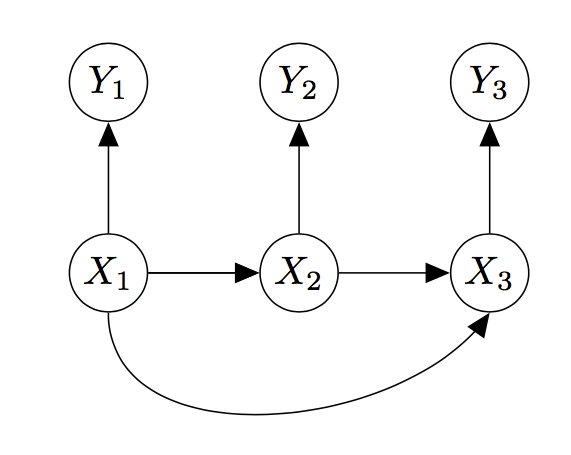 At this point, we can no longer remove any more arrows. In general, the message we are sending has direct dependencies between all symbols, and so the edges connecting the \(X\)s to each other have to stay. Similarly, disconnecting the \(Y\)s from the \(X\)s any further would start to make the \(Y\) sequence independent of the \(X\) sequence, meaning the outputs are independent of the inputs, which is not good for communication.

From this last graph, it is quite easy to read off expressions for the various joint and conditional distributions.

For example, we see that the \(Y\) values are only directly dependent on their current \(X\) values, which means that \(Y_i\) is independent of all other variables, conditioned on \(X_i\)’s value. So the \(Y\) sequence, given the \(X\) sequence, is just a bunch of independent random variables with the same distribution, which we can write as

It’s certainly nice to find alternative ways of presenting ideas, especially when that presentation is visual, rigorous, and intuitive. For example, the graphical formulation of linear algebra makes visibly manigest certain abstruse category-theoretic insights into linear algebra. But is there any special utility to thinking about channel communication problems using graphical models?

One big reason is that, as mentioned above, graphical models have been used to explain and develop algorithms for statistical inference in a wide variety of domains, often unifying previously disparate ideas, like the fast Fourier transform algorithm and the belief propagation algorithm. The shared formalism helps us transfer techniques and intuitions from other domains.

If that general idea doesn’t sway you, consider the following: when Shannon first posed the problem of channel communication as above, he was able to quickly and simply prove both that there was a bound on the rate at which information could be communicated and that this rate could be achieved.

What he didn’t do was show a practical way to achieve rates at this limit. In fact, no such method was known for almost 50 years. The method, now known as turbo-coding, was invented by Radford Neal and David MacKay, and the efficient decoding algorithm they proposed was exactly a belief propagation algorithm motivated by viewing the channel coding problem as inference in almost exactly the graphical model presented above, and they described it as such.

Hopefully that convinces you of the utility of the graphical model framework. By making manipulations of probability distributions visual and intuitive, instead of algebraic and rote, it clarifies problems involving probability and inference. In the process, it also unearths deep, surprising connections between different realms of mathematics, enabling the transfer of intuition between domains.