Like all ion channels, these proteins create selective pores in the cell membrane that allow particular ionic species through. Unlike the simple ion channels that determine the resting membrane potential, voltage-gated channels are not always open for business. They have at least two states: "open" and "closed". In the most general terms, their probability of being in a given state is a function of the voltage.

More concretely, for most voltage-gated channels, depolarization increases the likelihood that the channel is in the open state. For sodium channels, this creates a positive feedback loop, since sodium has a strongly depolarized Nernst potential. For potassium channels, this creates a negative feedback loop, since potassium has a strongly hyperpolarized Nernst potential.

This question concerns, however, inactivating voltage-gated channels. Such channels have three states, pictured below. 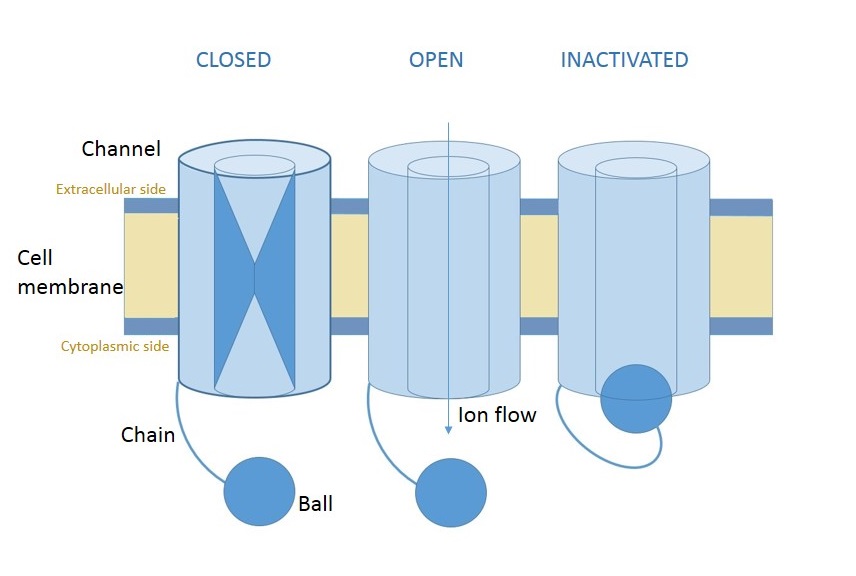 The new state, "inactivated", only occurs after the channel has gone from closed to open. The transition to this state is time-dependent and voltage-independent. That means that, no matter what the membrane potential is, an open channel will become inactivated after a certain amount of time, It will then remain inactivated, and so unable to pass current or respond to voltage changes, for some amount of time before randomly returning to the closed state. Note that this transition out is not independent of voltage, since the closed state is more favorable at lower voltages.

Inactivation serves to break positive feedback loops. When a collection of voltage-gated sodium channels is sufficiently stimulated, their depolarizing effect on the cell causes an avalanche of openings that would, if left unchecked, move the resting membrane potential to just under the Nernst potential for sodium. Time-dependent inactivation helps put the brakes on this process. A rapid, nearly-synchronous transition to the open state will engender a rapid, nearly synchronous transition to the inactivated state, allowing the group of channels to "reset" back to the all-closed state. This is a critical component of the action potential

The mechanism for this process is referred to as either the "ball-and-chain" mechanism or the "hinge-lid" mechanism. In either case, the protein has a set of amino acids that are attracted to the inside of the pore domain. These form the "ball" in Figure 1. In the closed state, these amino acids are blocked from reaching the inside of the pore. Once the channel opens, however, the pore domain is exposed and they can swing in, plugging the pore like a drain. This process takes some characteristic but random amount of time, giving rise to transient current flows as described above.

The only difference between a "ball-and-chain" and a "hinge-lid" mechanism is in the length of the relevant amino acid sequences. If the amino acids that support the "swinging" action are long, then the mechanism is called ball-and-chain – the action of the inactivating domain is reminiscent of a "cup-and-ball" game. One difference, however, is that the "chain" is made up of two strings of amino acids: one going out from the membrane, and another coming back in from the ball. So if the "chain" is instead extremely short, then the "swinging" action is more reminiscent of the hinged lid of a jar closing. In these cases, the "ball" is also much smaller, often just a few amino acids, and so reminds one instead of a little "latch".

One final note: the most important inactivating voltage-gated channel for neuroscientists is undoubtedly the fast-inactivating sodium channel. However, due to one of those quirks of nature and science, the fast-inactivating VGNC was discovered after the so-called "Shaker" potassium channel (see references 2 and 3). In part due to this historical primacy and in part due to the fact that genetics is easier in flies, in which the voltage-gated sodium channels play less of a role (insect neurons don't spike!), most of our knowledge of voltage-gated channel behavior comes from studying an otherwise obscure channel. However, many of these findings have been replicated in mammalian VGNCs.