First, let's review the basic features of the action potential, as discovered and described by Hodgkin and Huxley. The following figure will be helpful throughout. 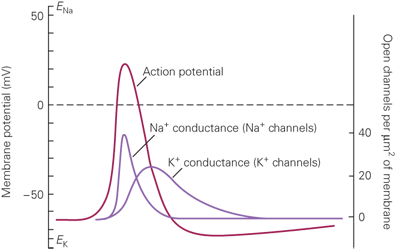 The membrane potential reaches some peak value, generally somewhere above 0, sometimes as high as +35 or +55 mV†.

Then, just as rapidly as it increased, the membrane potential decreases again, falling down below the resting potential* for a brief period before returning to normal.

The primary proteins underlying these phenomena are voltage-gated ion channels, which are tiny pores in the membrane that open in response to changes in voltage. Two players, the fast-inactivating sodium channels and the slow potassium channels, act in concert to produce a positive feedback loop first, driving the membrane potential up, then a negative feedback loop after, pushing the membrane potential down. The counts of active channels of each type are shown as purple lines in Figure 1.

The fast-inactivating voltage-gated sodium channel is responsible for the positive feedback loop. These channels are more likely to open when the cell is depolarized, and their effect is to depolarize the cell by allowing sodium to flow down its electrochemical potential^, i.e. into the cell. This depolarization will, naturally, cause more of these channels to open, and so on and so forth for the first 1 ms or so.

Two mechanisms combine to shut this train down.

First, the sodium channels are inactivating. This means that, regardless of the membrane potential, they can only remain open for a short period of time before they close themselves automatically. After closing in this manner, they are briefly unable to re-open. If you'd like to know more, check out this post reviewing inactivation mechanisms.

Second, the potassium channels are slow activating. Their voltage dependence is roughly similar to that of the sodium channels, but they take longer to open. They allow potassium to flow down its electrochemical potential, i.e. out of the cell. This efflux of positive charge causes the neuron to hyperpolarize.

† But never above the equilibrium potential for sodium. Why? HINT: Consider the Circuit Equation. What determines the maximum value for the membrane potential?

* But never below the equilibrium potential for potassium. Why?

^ If you need a review on the electrochemical potentials of the neuron, check out this post.