Hubel and Wiesel's 1962 paper followed up on their 1959 paper, which demonstrated the existence of simple cells in primary visual cortex.

The 1962 paper looked more closely at complex cells, provided a circuit mechanism for constructing simple cells and some complex cells, and showed the existence of orientation columns

If you're unfamiliar with the methodology of extracellular recordings, check out this post.

For a bit of background on their approach, check out this video from a TV documentary on their work.

Before diving into the complex cells, the paper describes a categorization of simple cells. Hubel and Wiesel approach the problem more systematically than they did in the original paper, reporting precise numbers of each kind.

Exemplars for each type appear in the figure below. Each one can be described mathematically as a Gabor function, or the modulation of a Gaussian with a sine wave. 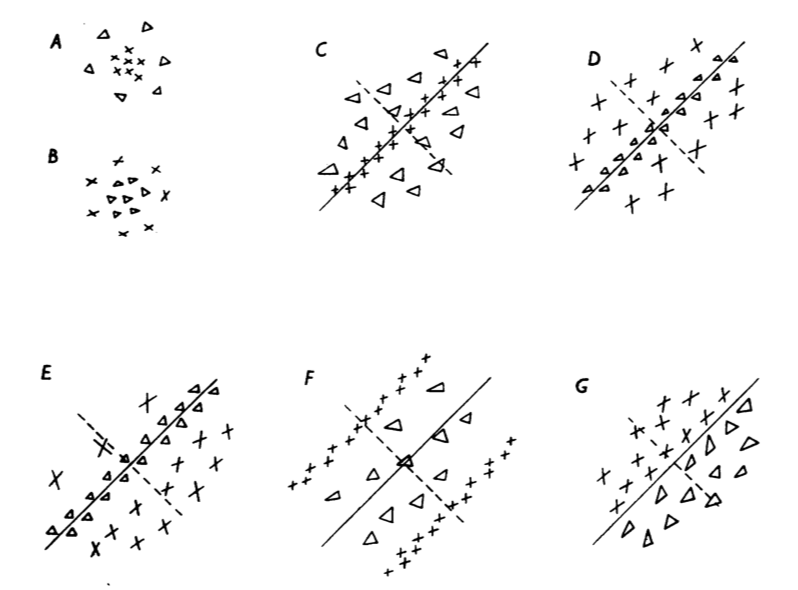 Cells of this type account for over 1/3 of their observations: 116 out of 303. Note, however, that they observed only 70 complex cells, meaning that 117 cells, again more than 1/3 of all cells, were not explainable in their paradigm.

Not as much progress has been made on solving this mystery as you might expect, or as Hubel and Wiesel expected, based on their confident prediction that these 116 unexplained cells were simply new kinds of complex cells. See the discussion at the end of the section on Hubel and Wiesel's 1959 paper in the blog post on the 1981 Nobel prize for more on this and other concerns with the Hubel and Wiesel model.

A Closer Look at Complex Cells

The meat of the paper concerns the dissection of complex cells, which they define as any cell whose responses to stimuli could not be explained as the sum of the responses to single dots.

The result is a bit of a menagerie, especially if one keeps in mind the examples from their first paper, some of which fall into the "unexplained" category above.

Some examples include "on-off" cells, which fire in response to the appearance of a stimulus or to the disappearance of its inverse, motion-detecting cells that fire bursts of spikes (pictured below), and large-field edge detectors. They also demonstrate that there are cells that detect the "dark versions" of the above – moving bars of darkness on a light background, rather than vice versa.

In the first, the depth of the electrode is recorded and then its path through the brain reconstructed after the experiment by taking slices of the brain and following the "scar" left by the electrode. This allows recordings taken at different points in time to be mapped to different anatomical coordinates.

In the second, they recorded the overall amplitude of activity when passing through an area in which they couldn't clearly isolate a single cell. This corresponds to a sort of local field potential, or an "average" of the activity of cells locally.

Lastly, their electrode occasioonally detected the presence of several unique cells. Lacking the heavy-duty computing of today, Hubel and Wiesel couldn't perform the complex clustering algorithms used in spike-sorting today. Instead, they had to cluster cells based only on the height of the action potential. Since only nearby cells will be detected by the electrode, so-called "multi-unit" recordings give a sense of nearby activity.

In all three cases, their results showed location and orientation columns, just as described by Vernon Mountcasle in somatosensory cortex.

Columns are oriented perpendicular to the surface of the brain, unlike layers, which are oriented parallel. See the image below, from the excellent neuroscience blog from UCSD, NeuWriteSD. Layers are indicated with Roman numerals, while columns would come from taking a given spot on the cortical surface and drilling down through all of the layers.

An "orientation column" is a group of neurons arranged in a column that share the same orientation tuning – they respond to stimuli at a certain orientation. The same is true for a "location column".

Hubel and Wiesel discovered that columns were both location columns and orientation columns. If you started at the cortical surface and drilled down, you'd run into cells with widely varying receptive field types – motion-selective, direction-selective, on-center, off-center, etc. – but with roughly the same orientation preference and responding to stimuli in roughly the same location in the visual field.

The final central achievement of this paper was the description of a reasonable neural circuit that could give rise to the observed phenomena.

How to build a simple cell from retinal/thalamic cells. 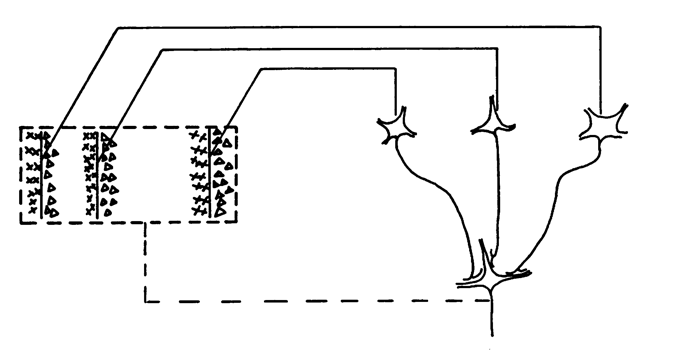 How to build a complex cell from simple cells.