The neuromuscular junction, or "NMJ", a sort of "synapse" between a neuron and a muscle cell, is specificed by an activity-dependent process. This process involves the recruitment of neurotransmitter receptors, mitochondria, and a Schwann cell to wrap the whole thing up tight. It is organized by the basal lamina first, and then mechanisms in both the muscle and the nerve take over.

Below, you'll see an electron microscope image of a neuromuscular junction, taken from Figure 55-7 in Kandel and Schwartz, with added color. 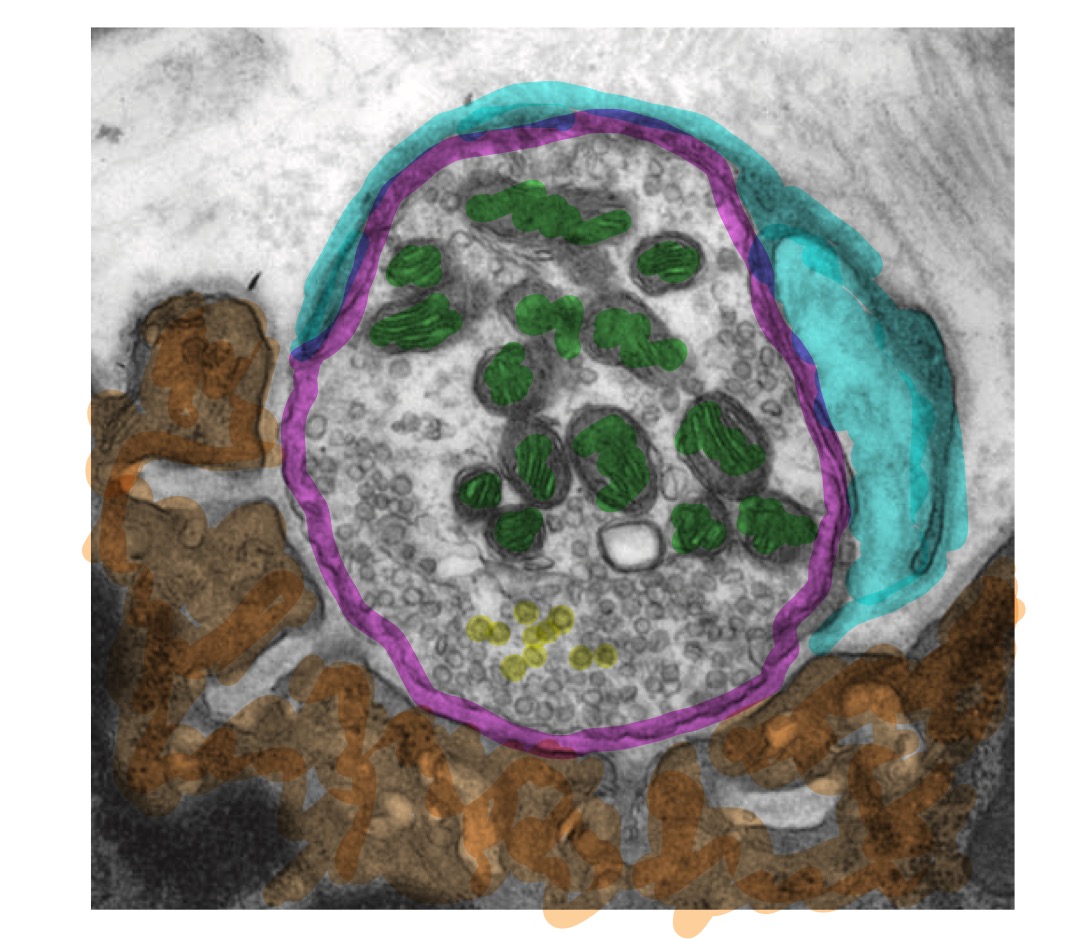 The neuro- part of the junction is on the top-right, circled in magenta. In green, I've highlighted the mitochondria, the "powerhouses of the cell" that provide the energy necessay for the cell to work. The smaller circles are vesicles, which identify this structure as a synapse.

The muscular component is highlighted in orange. The gray divots are called "junctional folds", and they are the primary place where the magic of neurotransmission occurs. They are enriched with acetylcholine receptors, or proteins that open an ion channel in response to the presence of the neurotransmitter acetylcholine.

Wrapped around the neuron, covering all of the exposed surface of the synaptic terminal, is a Schwann cell, the peripheral glial cell responsible for myelination.

The cell body of the neuron is located in the ventral horn of the spinal cord. The axon arrives at the muscle cell by following a series of guidance cues, or local signals that cooperate with the cell's genetics to guide growth in the right direction – somewhat analogus to the way IPs and URLs work. At each point, a local signal directs the axon to a new point, closer to its destination, where it receives a new local signal, pointing it to the next step on its journey.

The final destination, instead of being a picture of a cat stored on Google's servers or a blog about neuroscience stored at GitHub, is a slightly concentrated group of acetylcholine receptors on a muscle fiber. These receptors are concentrated in this location due to the presence of a special form of a protein called laminin. Laminin makes up the entirety of the basal lamina, a stretchy network of proteins that sheaths the muscle fibers. At particular locations, the laminin is slightly different, and at these locations, acetylcholine receptors concentrate. In addtion, laminins cause the release of a signal that encourages axons to grow toward them.

The result is that the axon growth cone docks with the muscle fiber at that location, resulting in an incomplete but functional neuromuscular junction.

Now, multiple signals pass in both directions, from nerve to muscle and muscle to nerve.

As described in another blog post, the muscle produces something called a "trophic factor", which deactivates a ticking time bomb inside the neuron that, left unchecked, would eventually lead to programmed cell death – apoptosis. The survival of the neuron is, of course, critical for NMJ function.

The nerve produces multiple signals to organize the production of a working NMJ.

Signals from the Nerve

Before we continue, one important point about muscle cells needs to be made. Unlike almost all other animal cells, they are multinucleate: they contain more than one nucleus, and thus more than one copy of the DNA. This is because muscle fibers form from the fusion of multiple progenitor cells, called satellite cells,

This means that genes can be made into proteins at many locations in the muscle fiber, not just at a single nucleus.

This poses a problem for the neuron. It has claimed this muscle for its lifelong partner, and part of doing so involves controlling the production of proteins, including the aforementioned trophic factor and acetylcholine receptors. But some of the nuclei will be far away from the neuron, as far as a centimeter, or over million times further away than the axon is wide, and could find another axon terminal to support. This simply will not do.

To fix this, the nascent pre-synaptic terminal releases lots of acetylcholine onto the muscle cell. This results in an electrical signal that is very similar to the classical action potential that propagates throughout the entire fiber. Active muscle fibers produce fewer acetylcholine receptors than do inactive muscle fibers, and so production decreases all across the cell.

At the same time, the neuron is releasing a chemical, agrin, that activates a variety of second messenger cascades to both increase the production of acetylcholine receptors and to draw them towards the site of the synapse.

Around this time, a Schwann cell finds its way into the picture and attaches to the axon terminal. This also induces the formation of the junctional folds, which become heavily enriched with acetylcholine receptors.

And with that, all of the pieces of the mature neuromuscular junction are in place!